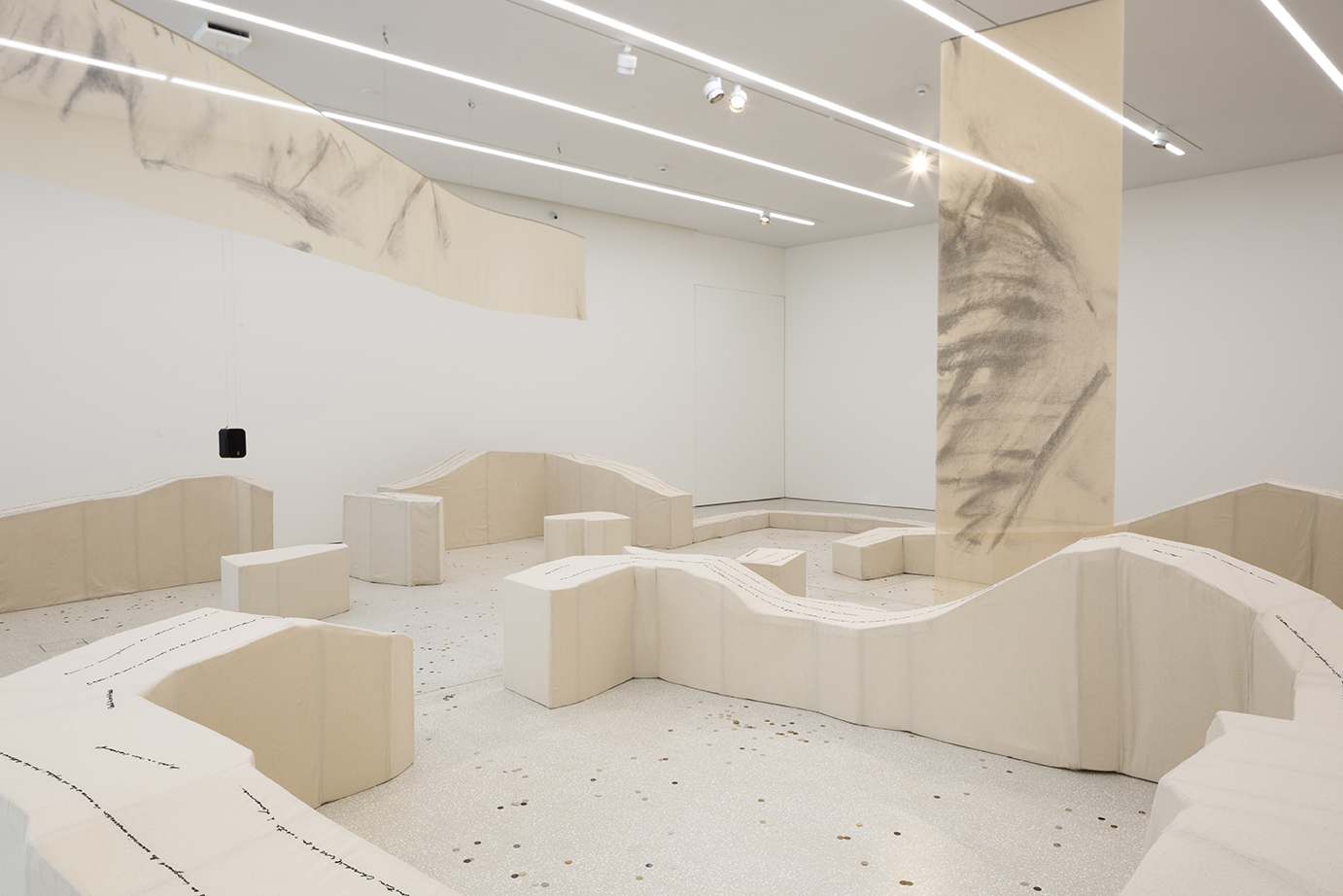 The works of Taus Makhacheva (born 1983, lives and works in Moscow), whether they take the form of performances, installations, or videos, are often inspired by a story – told, imagined, or experienced first-hand. She explores the grand narratives of history and the history of art, focusing on their constructions, omissions, and geographical and political slants. Take Tightrope (2015), a video installation presented at the 57th Venice Biennale, which shows a tightrope walker carrying copies of paintings from the Museum of Fine Arts in the artist’s native Dagestan across a rope stretched taut across a precipice, offering a metaphor both of the artist’s position and the hierarchies at work in the creation of artistic value.

For Lausanne, Taus Makhacheva has developed her considerations on our relationship to the past, to culture and to the fluctuating value of art, drawing on the MCBA collection. Her installation for the Project Space is the result of a process of research, during which she followed the move from the former museum site to the new premises and all the steps involved in restoring, packing, and transporting the art works. She also probed the history of the collection, taking an interest both in the grand narratives that underpin it and the anecdotes and individuals who built it up over the years. She offers visitors a stroll through an imaginary museum that fleshes out narratives rooted in reality but rendered as a fiction.

The exhibition title refers to the mysterious disappearance of 4,224.92 cm2 from a pastel by Edgar Degas in the MCBA collection at some point between the inventory drawn up after his death and the work’s acquisition by the museum in 1936 (Blanchisseuses et chevaux, now on view on the 1st floor of the Collection). This enigmatic loss echoes Makhacheva’s interest in processes of construction of artistic value, while also offering a clue that let her plan her exhibition like a plot and lay it out like a narrative across the installation space.

Taus Makhacheva’s installation is almost entirely made up of fabric, a medium that protects and envelops while at the same time holding the potential for uncovering. Gesturing both to painted canvas and to clothing, decor, and the tradition of soft sculpture, it can be read as a human-scale model of an abandoned museum. Soft-picture rails that seem to have been put up at children’s height, hand-embroidered with stories both real and fictional of how artworks came to be in various museum collections, confetti on which details of paintings can be identified, and bolts of printed cloth on which the rough lines of the now missing parts of the Degas pastel can be made out, all lead to a large board, hung horizontally, with several openings that visitors are invited to poke their heads through to listen to a sound that simultaneously evokes water, fire, termites and various other pests. The visitors’ bodies are thus incorporated into the installation, playing an active listening role while temporarily becoming motionless, ephemeral statues as part of the installation. In another part of the space, stories about the value of art, about museum storage and that which is kept, collected and yet hidden, are broadcast by loudspeakers. Like the sculptural elements of the installation, the narratives populate the space and transform the relationship with time and with that which is known, imagined, witnessed, or felt.

With essays by Uzma Z. Rizvi and Vincent van Velsen