Taus Makhacheva’s performances, installations and videos are often inspired by stories heard, imagined, or witnessed by the artist herself. She explores the grand narratives of history and art history, studying how they are constructed, what they leave out, and their geographical and political biases.

4’224,92 cm2 de Degas, an installation created for the MCBA’s Espace Projet in 2020, is part of this ongoing exploration. The title refers to the mysterious loss of part of a pastel by Edgar Degas, Blanchisseuses et chevaux (Laundresses and horses), between the moment it was inventoried and photographed in the artist’s studio after his death and the moment it joined the MCBA collection in 1936. The unexplained loss echoes Makhacheva’s interest in processes of construction of artistic value and is also one of the clues that allowed her to develop her installation as a plot narrated across the exhibition space.

4’224,92 cm2 de Degas, consisting almost entirely of upholstered elements, can be read as a 1:1 scale model of an abandoned museum. The soft picture rails embroidered with fragmentary stories, real and imagined, recount the various ways the works were acquired, while confetti scattered on the floor represents details from paintings, and fabric bolts are printed with traces now missing from the Degas pastel. The various elements lead to a large suspended plateau with a number of openings that visitors can put their heads through to hear sounds evoking water, fire, termites, and other insect pests. Elsewhere in the space, narratives about the value of art, about museum storage and that which is kept, collected and yet hidden, are broadcast by loudspeakers. The bodies of the visitors engaging with the artwork are both actively listening and momentarily motionless, becoming ephemeral statues and part of the installation in their own right. Like the sculptural elements, the narratives populate the space and transform its relationship with time and with that which is known, imagined, lived, or felt. Flowers, 2006
David Hominal mixes images from different sources and references  with different arts and pictorial traditions in order to take on the great narratives of painting,… Samois, l’île (Samois, Island), 1917
Albert Marquet spend August and September 1917 living by the Seine in Samois, a village about forty miles south-east of Paris. Once he had found… 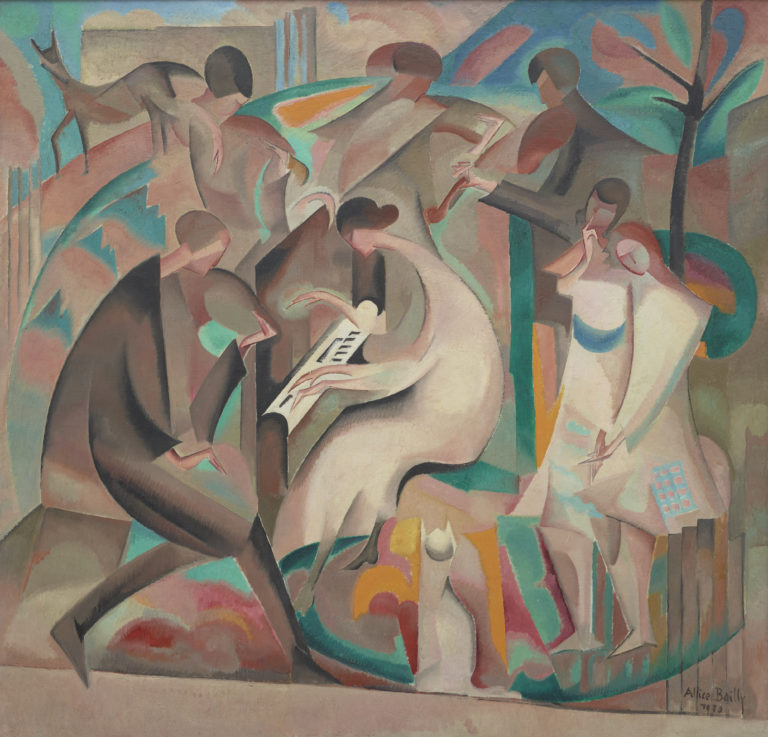 Le concert dans le jardin (Concert in a Garden), 1920
As a Swiss citizen, Alice Bailly was forced to leave Paris during the First World War and struggled to make a living in Geneva. Most…
Scroll to top of the page